AGENT-3D can look back on a successful year 2016 and already an even more successful and eventful first half year 2017. Technology projects started and new projects were developed. The association AGENT-3D also represented itself at trade fairs to promote the joint Project. 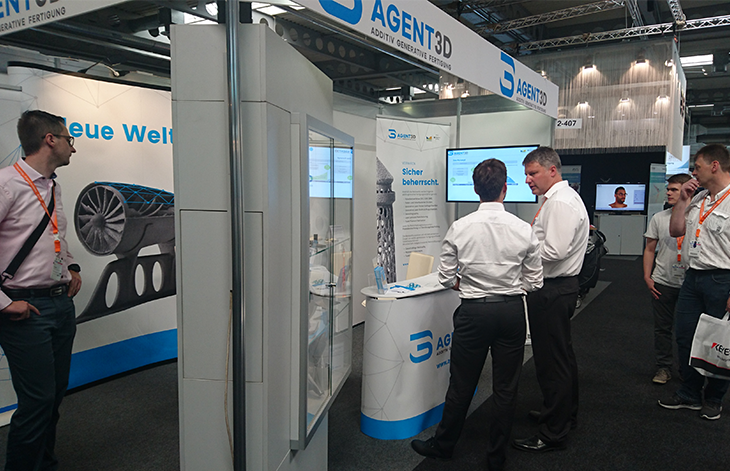 Running technology projects
In autumn 2016, two new technology projects started. AGENT_FunGeoS took its first steps in September 2016 followed by AGENT_elF in October. In 2017 three other projects began: AGENT_multiBeAM in February, AGENT_IMPRoVE and AGENT_CastAutoGen in May.

Election of board and chair of the association
The semi-annual meeting of the AGENT-3D association took place once again in Dresden in March 2017. One of the outcomes of the meeting was the re-election of the board and chair. The great support confirms the good work of the board. The reelected chairman, Prof. Leyens, is supported by the two deputies, Dr. Janny Lindemann from GfE-FREMAT, Freiberg, and Mr. Martin Schäfer from Siemens AG, Berlin, further on. We are thankful for the past coorporation up to now and offering our congratulations to the old and new board!

AGENT-3D presents itself - Trade fairs
From April 24th to April 28th the annual trade fair HANNOVER MESSE took place. It is the most important global industrial fair with over 6.500 international exhibitors. The AGENT-3D association also took part together with Dresden University of Technology.

Later this year in June AGENT-3D introduced itself for the first time with its own fair stand on the Rapid.Tech in Erfurt, Germany. New contacts were forged and the association has enhanced its visibility to the additive manufacturing sector.

Next month our semi-annual meeting will be held within the framework of the WerkstoffWoche in the Dresden fair. We cordially invite everyone interested in the topic of additive manufacturing to visit both the meeting and the fair.

For your free ticket, you need to book in advance on:
https://www.werkstoffwoche.de/info/anmeldung/registrierung-fachmesse/

International meeting for experts on additive manufacturing in Dresden

160 experts and novices from 23 countries took part in the first two-day symposium at Fraunhofer IWS. This highly successful event will be repeated in 2017.

Additive manufacturing of highly heat-stressed components made of nickel superalloy

Components of highly heat-resistant alloy can be produced quickly and at low cost by the newly developed additive technology.

Stay up-to-date with our newsletter and don’t miss out on the latest innovations.